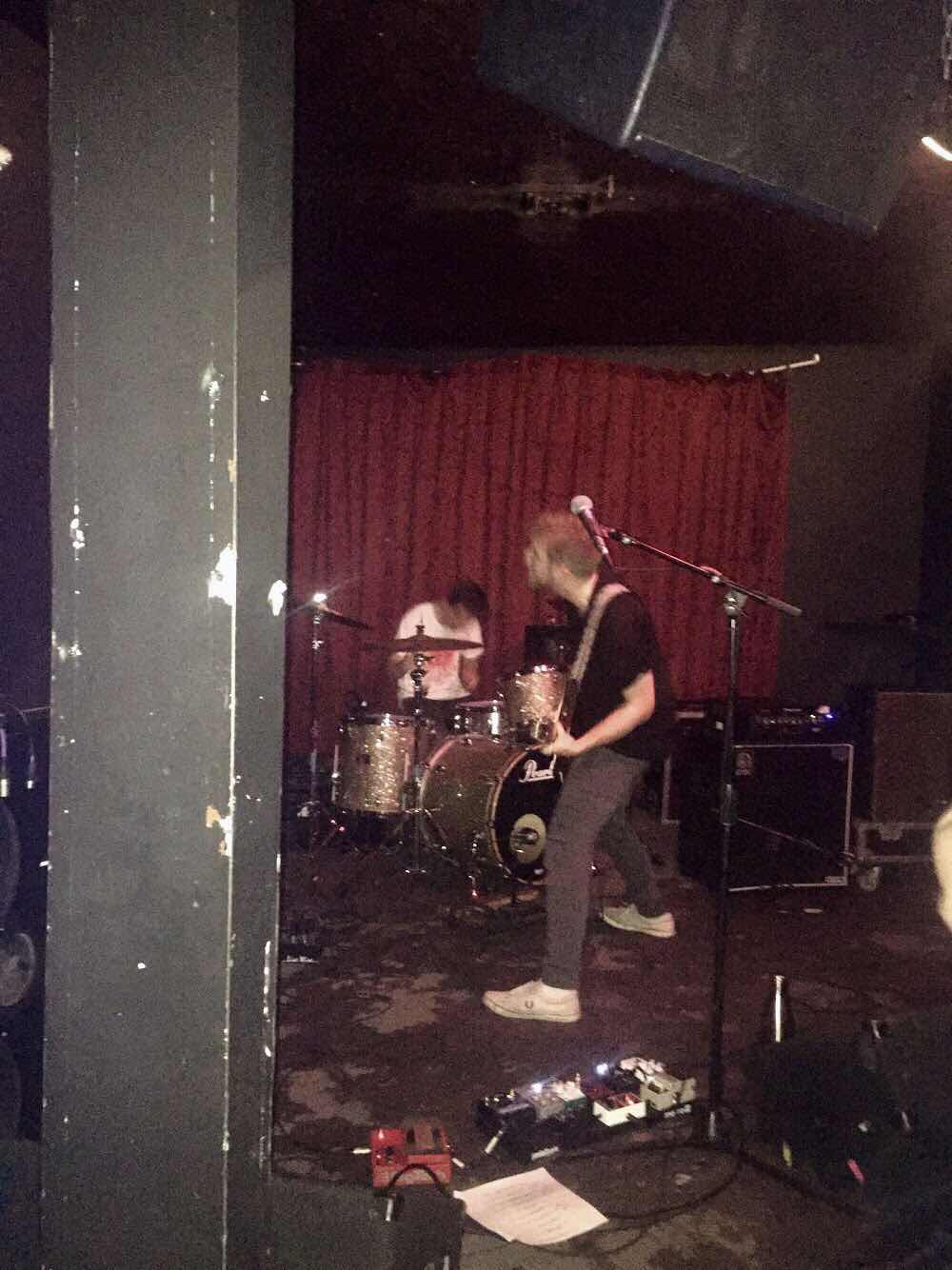 Before my in-person interview, Luke and Ian said they were ready and I was kind of confused….. “Wait aren’t there more members?” I said… And I swear I thought they were a four-piece because they definitely sounded like one. Vannessa laughed and said, “no they’re a two piece”. It blows my mind that these guys can make as much noise with two fundamental instruments (electric guitar and drums). I assumed that they were a four-piece mainly because of the quick change between distorted and acoustic guitar in hometown’s chorus. While I did get chills the first time I heard that part of the song, my mouth dropped when I saw that there was only one guitar. This two-piece aren’t only the most talented musicians I ever met and seen, they are also the most thankful boys I know.

Ian tells me that “we met… First day of Junior kindergarten actually….. There were three guys… Three boys in the class, and as a kid you were attracted to other boys…… You know… And I was like ‘hey’, and… That was it…”. I’m guessing sometime before 2016 the boys, with inspiration from bands like Highly Suspect, July Talk, and bands that are “killing it” either in Canada or in the rock genre, started their journey.

Luke tells me that “Uh… hometown is like… Ironically about the town we are from, and the feeling we get… Or had… Or feeling we had about not being heard. Cause we’ve been making music for like ever. We come from a town that has a very nonexistent music scene, and it was really tough deciding we wanted to start a band. Because you know there’s not enough kind of people who would look into it, so it’s about how we kind of struggled to get ourselves out there.”

Interestingly, that song that was written in frustration has now reached over 8 million listens on Spotify, been placed on Spotify playlists such as Rock This: Best of 2017, Dirty Rock, All New Rock, and was on Hot New Bands (all created by Spotify). Rather it was the chorus or the raw emotions that these guys seemed to bring out in this well-produced song, people obviously f–king loved these guys… And why not?

Previously during this summer, cleopatrick has released the boys EP that contained ANOTHER huge song called youth. The band released to the press that “growing up, the male population of my small town was comprised of strange social castes – hockey boys, country boys, and general (a–holes) with twisted hive minds. (Every Friday), (I) would hear them talk about which girls they were going to hook up with that weekend, and just how far gone they were planning to get. (Then) every (Monday), the stories of sex and regret would spill over onto their desks and (I) would sit and wonder how this could be so normal. ‘youth’ is a (f–k) you to all the perversion and disrespect that (I) was trapped in (High School) with. (I) want them to know that (I) haven’t forgotten.” While this quote from youth’s press release is written in first person, it isn’t specifically saying who that person is (I assume it’s Luke writing this though). Either way, social outcasts or more mature boys and girls in High School who were and probably still are surrounded by this testosterone-driven environment can say that this song is a sad but true fact across the States.

“(It) was a struggle between reserve or over-indulgence. ‘youth’ illustrates this struggle using the symbol of a cigarette – the idea of indulgence, regardless of who it hurts or what it does. (By) the time (I) was finishing (High School), a profound anger was building deep inside of me. (I) couldn’t go to the parties because, when (I) did, (I) felt overwhelmed with anxiety from the mistreatment and predation that thrived in those environments. “youth” is me finally letting that anger out, and reaching my conclusion on how wrong it all is.”

Once again, cleopatrick’s raw emotion and (now) anger came crying out in this utter awesome single. But it wasn’t just that one song that really highlighted that whole 6 song EP. The whole EP was a highlight, in fact, songs like the depths will never get old with me just like hometown and youth. These songs aren’t only made by a rock band, they’re made by a two-piece rock band. I also fell in love with songs like Chromeo (2016) and City Kids (2016) off of their first released album “14” that was released a year earlier than hometown (2017).
Luke says his favorite song they’ve released is bernard trigger, while Ian says daphne did it was his favorite. Ian says it’s “because of how fast it is, and I really get to f–king unleashes my drumming. You know what I’m saying?” Luke says “that’s the song Ian snaps on.”
Overall, if cleopatrick had a mission statement it would be something like this.. Go against the weird overproduction and dishonesty in rock music right now, break down the boundaries in the industry, and be one of the rock bands that are like killing it and doing whatever they want.
By now I have truly no idea what the hell cleopatrick is doing other than preparing for their Fall 2018 tour (starting on September 17th at Le Supersonic in Paris, France). However, I will keep everyone updated the second I hear about a new song being released!
A huge thank you to General Manager Vanessa Markov, Luke Gruntz (vocals and guitar), and Ian Fraser (drums) for the absolutely incredible friendliness and appreciation they show for everything and anything I and all their fans do for them! Again, I will be staying in touch with Vanessa, and I will make sure to keep everyone updated!

This site uses Akismet to reduce spam. Learn how your comment data is processed.